Just What is a Computer Virus?

It is like catching the cold virus, it is spread by other people through bacteria, reproducing until the system is infected and sick. It is one of the most common computer repair issues that are out there. No one wants a virus, it does not feel good, and they restrict your activity as well as keep people at a distance from you. The computer virus acts much like the biological virus in that it has the same effects, only it infects files and spreads electronically. In this article I will define the virus, explain how it spreads, and how to tell the difference between a virus and other forms of attacks.

The basic definition of a virus is a series of written instructions in a computer program that is designed to reproduce and infect another computer. It is programming code that’s purpose is to destroy another program. Most of the time a user will not?realize?that they have a virus because they can take the form of a regular program, or hide deep in your system files?unbeknownst?to anyone it is there.

Anti-virus programs have been fighting a never-ending battle with hackers, people who want to rip off and spread chaos throughout people’s computers. How do they spread? A real computer virus can only be spread by a human who inserts it into the target computer himself via floppy or disc, or even sending it over the internet. 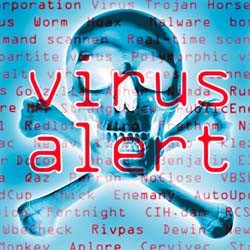 The first “wild” virus, that is, a virus that appeared out of the computer lab back in the 70’s, actually attacked the Apple DOS system. Back then, the only way to really create a virus and have it spread was through hands-on work like inserting a floppy disk into a computer.

Viruses spread when they are attached to the .exe or executable file. Say you want to open a program that has been on your computer for a while, you trust it to work properly and it does. But a hacker hooks a virus to the .exe file that the next time you open the program the virus takes effect, damaging the files and ruining the program.

That is the main idea of a computer virus, to attach to a file (cell) and jumping to other files like it, until the computer is no longer usable. At Computer Geeks calls come in about viruses?or recovering a computer from an attack. So what can you do about it to prevent your computer even further than the anti-virus protection is.

When in doubt, and when your computer is definitely infected, choose the System Restore that was explained earlier in the November blogs. This will turn back the clock to a time when ?your computer was not infected. But hackers are getting smarter, making their viruses disable the Control Panel, or messing with the System Restore so that the computer gets restored to the same day the virus started.

The difference between the virus and other programs like adware, spyware, and malware, is that the virus spreads and reproduces. It is a catch-all phrase for all the bad stuff that happens on a computer. When something starts to go wrong, people think virus because it makes sense. But knowing exactly what is wrong with your computer can allow whoever you ask to fix it to do it faster and perhaps recover the files. And if you need help you can always call us at Computer Geeks