iPad 2 to be on show in San Francisco 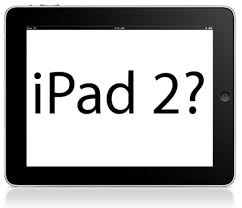 It has been reported that the Apple is holdings it?s always anticipated event on March 2nd of this year. Many sources have stated that the company will be unveiling the first look at the iPad 2. The thoughts on the iPad 2 are simple, it will be thinner than the iPad 1, and it will have an improved display and will also have a front facing camera for face to face video chat. It is also said that the 2 will be running on a Qualcomm multimode chip with GSM and CDMA based network support around the entire world.

This show will be a very big deal for Apple. With competition finally hitting the tablet market we will be seeing Apple trying to show off how great the iPad can really be. Every other tablet is running the Honeycomb version of Google?s Android mobile OS. And with nearly 25 million iPads sold since its inception last spring will the iPad 2 be able to reach the same plateau with all of this new competition? As I always say, time will tell.