The day of the desktop tower is coming to an end as PC’s and Mac’s try to keep up with their competitors: smartphones, touch-screens, and tablets.

Desktops used to be the only face for computers, now there are many different types of technology that offer access to all the same features the desktop used to have a monopoly. It would seem that desktops are heading for the basement, where all the old dinosaur equipment go, extinct as the new and fresh technology moves on and evolves.

Well that is what the desktop is doing: evolving from the basic, simple, boring model of a monitor, keyboard, mouse and keyboard with five wires going every where cluttering up space to something new, innovative, and exciting.

The desktop has come a long way from its days filling up a room, to fitting on a desk in the form of a calculator, to a personal machine with a monitor thanks to Apple and Windows in the early 80’s. From that point on it has been the upgrade and improved model, trying to change the look, feel, and performance as technology advanced.

With the history in mind, and the retrospective look at it, gives us a gauge to measure progress with. Measure the use of desktops today with the use of it 10 years ago. Big change. Now we have computers in our hand and sitting on our laps, the desktop is more like a dust-top, as people favor mobility over ability.

Ability is perhaps the key to desktops surviving. They never really lost the ability to deliver the most power in one machine, that fact has remained the same, the need for powerful?performance?in video, graphics, space, and speed, the desktop still sits on top. The market always changes and the big change that affected the desktop was the touch screen, which is run by the system-on-chip (SoC).

Touch screens are just cool, the way one can push a button on a screen and it presses down as if it was real, who wants to play with a mouse after that?

In comes the All-In-One PC. The idea was to follow the trend of the touch screen and the smaller, more compact design. 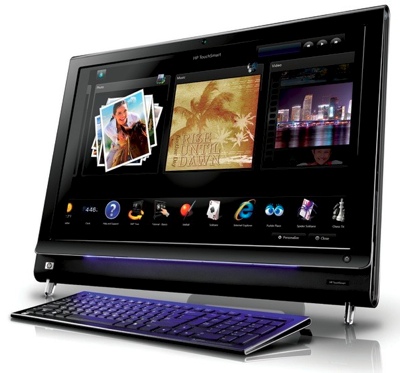 So developers picked up the CPU sitting in the desktop tower and shoved it into the monitor, kicking the tower out of the window. There you have it.

Now we have the iMac Core, the Gateway?ZX6900-01e, and the HP TouchSmart 600 Quad. The pluses are worth considering, as Microsoft has big plans on improving their Windows 7 to work better on the touch screen. Another plus is the mobility of these All-In-One PC’s. A lot of them come with handles and carrying cases, there is only one plug so it is easy to disconnect, pack it up from your office and carry it home to use it there!

The desktop has become a better version of the laptop.

So stay tuned in to the Computer Geeks Blog to find out the newest developments on this topic!