Mobile Wi-Fi is on the Move

Remember when you had to drive across town to get a signal from wireless connections coming out of cafe’s or someone’s house? It seems like a faint memory now, as technology speeds on with or without us, those days are done. Today there is a way to carry a Wi-Fi signal with you. This is a growing trend that will only keep getting more use because people need connections, and they need them now. Not down the street, not at home, todays consumer of electronics and web media needs access to the world every second of the day. Just what is mobile wireless, how does it work, and how can I get connected? 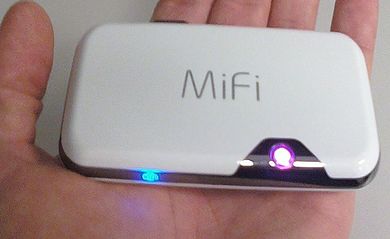 This device right here is from Novatel, and it is called Mi-Fi - a compact wireless router you can pocket and walk around while producing a wi-fi signal.

It is a new day and a completely different age for using the internet. Mi-Fi gives the user an option of connecting up to 5 devices to it, whether that be your smartphone, laptop, desktop, or gaming device. No more having to sit in a noisy Starbucks or try to connect to a weak signal from someone else’s router. You can go anywhere where the signal can backconnect to a cellular network (Sprint, ATT&T,?Verizon) and then frontconnect to local Wi-Fi devices.?So the signal is sent to the cellular network, then sent back through a Wi-Fi device to create a local area of shared internet connections.

Sprint will actually be offering the capability to connect this Mi-Fi device with 4G speed. This blog talked about the real difference between the regular third generation speed and the new fourth generation, coming to the conclusion that the only difference is in faster download speeds for websites and media. The catch is finding a device and a network that supports the 4G connection, so good luck as it is still very new.

There are other devices that create a mobile Wi-Fi spot, such as ATT&T’s 3G which connects via USB to your laptop. Apple came out with an app called MyWi, which turns your iPhone into a Wi-Fi hotspot.

However, beware of security issues that could leave you wishing you had not opened up this mobile hotspot. Hackers and anyone who can search the internet for ways to get into your Wi-Fi connection can access personal information. Already there have been accounts of Wi-Fi signals being breached by hackers and information such as security keys and GPS locations were ?compromised.

Mi-Fi from Novatel is for the consumer who is always on the go and cannot spend hours at the various locations for Wi-Fi connections. It is expensive, you must activate it through a contract with Sprint costing $60 a month. The device itself costs about $100.

What does this say about the future for Wi-Fi and the internet? It is saying that laptops are becoming less of a necessity as smartphones offer the same functions but with easier access and portability.

As technology speeds up, can we keep pace with the constant updates and improvements and releases of everything new? Better tighten up those running shoes!