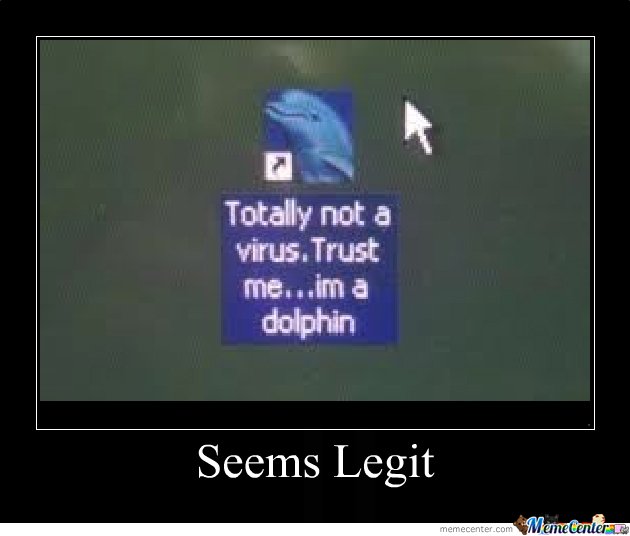 Why am I infected with this virus?

Whether it’s Conflickr or a new fake anti-spyware program, it seems like spyware and viruses are inescapable for any computer connected to the Internet. It’s estimated that the amount spent annually on security software in the United States has risen to over $800 million in recent years, but computers are still getting infected daily. Why aren’t we virus free yet?

The answer lies in the nature of malicious programming. Computer viruses don’t spring up out of nowhere, they’re designed by programmers who either have nothing better to do and think it will be interesting, or professionals who make money by abusing your computer. Whenever anti-virus vendors are made aware of a new virus, they create a new definition for their anti-virus software to help isolate and remove that virus if it is downloaded onto your computer. Once the new definition is widespread enough that a significant percentage of computers are safe against that virus, a new one is created by the malicious programmers and the cycle begins again. Nearly two thousand new viruses were identified every day in 2007, and the problem isn’t going away any time soon. This is why you need to allow your anti-virus software to download new virus definitions so often.

Frustrated hackers tired of the rapid turnover of “regular” viruses have graduated to attacking your computer’s defences directly: your anti-virus software. Many new viruses include programming that either hides itself specifically from several popular anti-virus programs, prevents them from downloading new virus definitions, or shuts them down entirely. Even when these new viruses are identified quickly, many computers will already be infected and the software on the machines will be unable to remove the virus. In cases where one virus shuts down the anti-virus software entirely, other viruses will often infect the machine and can render it inoperable in a matter of hours if not minutes. Still other nasty viruses employ tricks to avoid removal techniques, and will re-infect a machine after an anti-virus program or a user tries to delete them.

The fight against computer viruses is non-stop, but you can do something to help protect your system. Installing a good anti-virus program and allowing it to update frequently is just the first step, but beware of fake anti-virus programs you may find online (many of these are viruses themselves). The fake anti-virus programs normally go by the names: Antivirus 2010 Pro, Windows Pro Police, System Guard? 2009, Personal Antivirus, Antispyware XP 2009, and many more. You can see a pattern in how they name themselves. Never download anything from a person or website you don’t trust, never open a suspicious email (you don’t always have to open the attachments to get infected), and don’t go to websites with a poor reputation. If you take these steps and your computer still gets infected, have a trained professional remove the virus for you instead of trying to remove it yourself. Modern viruses can be very difficult to isolate and remove, and it’s very easy to damage your system accidentally while trying to remove one.

If you’ve got a slow computer and think you’re infected, call Computer Geeks today. Our techs have the tools needed for proper virus removal and have access to fast breaking news about new types of viruses and their removal. Computer Geeks is a nationwide on-site computer service and repair company.? If your computer has any of the following problems, we can help: Slow computer, Virus or Spyware, Computer startup problems, Printer not printing, Not connecting to the Internet, Scanner not working, or the “blue screen of death”. We also offer other technical support services, including: New pc setup, Data Backup or Recovery, Wireless network setup, Business Network Firewall setup, Upgrading memory, cpu, hard drives, video cards, and more. You can pick up the phone at any time and call us at 1-800-GEEK HELP (433-5435).

Tired of Weak or No Signal?

That damn yellow triangle sign where your wireless bars should be has a “!” telling you that the signal is there, but due to a weak signal or no signal your internet use is put on hold. Until the signal can regain strength, your first thought might be to sit there patiently and wait it out, but who has time for that anymore? We live in a digital world, a wireless world, one that is very fast and waiting is something the tribes did sending a message to another camp hundreds of years ago. Try a second thought: change the things you can! The power to change the signal is yours, listen up.

If we look at the router, it is really an?amazing machine that is capable of fascinating feats for which we should be grateful for, I mean this little network tool makes our lives SO much easier. If we did not have the router, where would we be? Think about it, while you walk across the office to deliver something that could have been handled on a wireless network.

It all started back in Stanford with Bill Yeager who created the first router, which allowed for the wireless internet to blossom, as well as open many doors for the future. Yeager was asked originally to connect various departments at the school, he did much more than that. Back then they were only running on 56kb of memory, look how far it has have come!

How to combat Weak or No Signal

Now that you know a little bit more about where router’s come from, let’s talk on improving that sometimes weak signal which is everyone’s enemy if you use wireless.

If all else fails, just turn the router on and then wait for a couple minutes, then turn it on again. Resetting the router will boot it up again, it usually works to get a good signal after reset.

I don’t know about you, but I am sick of that stupid yellow sign that blocks my internet and keeps me from accessing work, finishing emails, and all the basic tasks the internet allows me to do with ease. Thanks to these tips though, I will never have that problem again. After all, ignorance is the only real problem, everything else is just details. As always feel Free to contact us via email or give Computer Geeks a call at 800-433-5435 if you want us to fix it for you! Special ONE DAY ONLY sale of WinPatrol Plus for 99 Cents!

Want to maintain strict control over what?s running on your computer, keeping an eye on the use of your resources and restricting the operations of any process all the way to the farthest depths of your system?

WinPatrol Plus is a popular and extremely powerful tool that allows Windows users to monitor every aspect of their system, taking the core features of your Task Manager and amplifying them considerably. From controlling what launches at your startup to alerting you of any sudden change in your system, this is for the you users who always exercise vigilance when operating your system.

Normally retailing for $40, the developers of WinPatrol Plus have announced a special promotional offer, making it available for just 99 cents!

Good for ONLY today, this is an offer you might find difficult to ignore.

You can read about what this tool does at the developer?s site.

If you?re interested in owning this, visit either their site or purchase it off the Yahoo! Store.

Specify which programs users can run in Windows 7

If you?re the administrator of a shared computer on which you have multiple users, you very well could be someone who wants that computer used for a specific purpose, wanting to limit access to a select few applications. This is especially true of businesses where lapses in productivity could be a concern. You could be a manager looking to have your network administrator to craft a means of increasing the productivity of employees, or you might be a parent who?s mindful of the impact your children?s computer use is having on their studies.

For whatever the reason, Windows 7 allows you to decide just which applications users of that shared system can open.

This feature is not available for users of Windows 7 Home versions.

First, you want to click on the Start button and enter ?gpedit.msc? in the search box. Press Enter.

Then, you?ll want to go to User Configuration Administrative Templates System. Once there, look under ?Setting,? where you will then double-click on ?Run only specified Windows applications.?

You” have to set that to ?Enabled.? Then, in the Options section, click on the ?Show? button.

Doing so will pull up a ?Show Contents? window in which you can enter only those applications you want users to have access to. Once you?ve completed the list, click ?OK.? Close out of the Local Group Policy editor.

With that done, you have now set restrictions on which applications users of your computer can avail themselves of. Should someone try to use one that isn?t included on your list of allowed applications, they will see the following message:

If you?re someone who monitors which applications are being used on your computer, this a great feature that will assist you in that regard.

An easy and safe way to test Google Public DNS

Announced a couple of weeks ago, Google has recently rolled out with Google Public DNS, which is a said to increase the speed at which you browse the internet. Completely free, Google?s service replaces your Internet Service Provider?s DNS with theirs.

If you?re someone that feels uneasy when messing with the settings associated with your router and internet connection, you might be interested in an extremely easy-to-use application that gives you an opportunity to test Google?s Public DNS and determine whether its benefit outweighs whatever hassles you might fear from switching over to it.

It?s called the Google DNS Helper, and its purpose is to allow users a chance to test out multiple public DNS servers to determine which ones introduce a noticeable improvement over the speed of your current DNS server.

Using it is simple, with just two options for users to worry about, saving them the stress of having to wrangle with their network settings. With just one click, this application switches you over to Google Public DNS, saving your current DNS settings before doing so. You?re now able to browse the web with your new DNS settings, having only to click the other button if you ever want to return to your original configuration.

If you?re interested in trying out Google?s DNS solution, this is a convenient ? and, more important, safe ? way of doing so if you?re someone who?s wary of tinkering with your router and network.