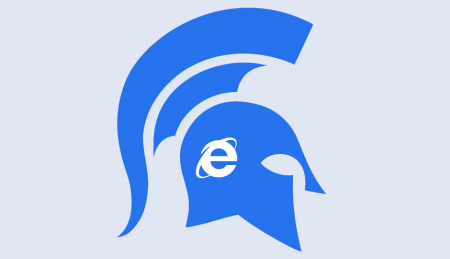 Spartan, The Death of Internet Explorer

All of us Geeks in the tech community HATE Internet Explorer with a passion. Hell, I’ll download Safari on my PC before I’ll use it. I’ll switch back to dial-up and use a Net-Zero browser before you see IE on a computer that I own. Apparently Microsoft has made it’s own New Year’s Resolution, to rid the world of IE! In comes Spartan,? an entirely new, light-weight browser that should be able to compete better with Google Chrome and Mozilla Firefox. Sticking with their obsession with the Xbox phenomenon “Halo” to theme all of it’s new products (“Cortana” is their version of “Siri”), more than likely to appeal to the younger audience.

Spartan will make it’s grand entrance in 2015 coupled with Microsoft Windows 10, and although they aren’t “replacing” IE, lets be honest, Internet Explorer 11, should be the last iteration of that browser. Internet Explorer has been losing market share among computer browsers for years (it?s at about 58 percent today, according to NetMarketshare.com, compared to more than 90 percent 10 years ago), and browsers from Apple and Google dominate the mobile market.

Spartan should support extensions, and will more than likely be using an updated version of the Trident rendering engine, which means it should be able to go blow for blow with Chrome and Firefox. On January 21st, Microsoft plans to show some of the new features of Windows 10 and in all likelihood, we should get a peak at Spartan. Unless the software isn’t ready yet, in which case they don’t need Spartan’s first appearance to be riddled with a bug, or a crash, which would be fatal to the project.

Windows 10 is designed to run on many different devices, including desktops, laptops, tablets, and phones. Microsoft?s goal is for the user to be able to have a familiar experience no matter what type of devices they?re using, and to that end, if ?Spartan? is indeed under development, we?re likely to see both desktop and mobile versions in the end. Internet Explorer 11 is already available for Windows computers, tablets, and phones, so the two browsers will probably coexist for the foreseeable future.

Internet Explorer made its debut in 1995 as part of the Windows 95 operating system. Microsoft hasn?t built an entirely new browser since then ? all its focus in that area has been on keeping Internet Explorer up to date ? so a made-from-scratch ?Spartan? would be a big deal for the company and for customers.

And maybe Microsoft wont have to deal with these memes anymore..

In a recent blog post about the browser war going on between Internet Explorer, Google Chrome, and Mozilla Firefox, it looked as if Chrome was winning the battles and taking over. But as in war, the victor only seems to win, thus catapulting us back into the firing lines of these fast and ever-advancing browsers all competing for the top spot on the world’s computer.

Firefox is pumping out these new versions, with this new release being the seventh beta version since its inception a little over six years ago. However, release of the full version has been delayed until 2011 due to bugs and problems that pushed back the release date. It seems this is not the first time Mozilla has slipped up and missed a deadline, but let’s look past the mistakes and look towards the future with all it’s wonders and possibilities.

Can it get much faster? That is one question that seems to be popping up a lot lately as these browsers heat up the race to be the fastest out there. According to people who claim to know something, Firefox 4 is THREE times faster than the existing 3.6.12 version. What is so great about this new browser? Let’s take a look at the record.

The tests came in from both the Kraken and Sunspider JavaScript benchmark, and the V8 benchmark test, to prove just how fast this browser was. There are three reasons for this improved capability of loading web pages:

Together these equal a powerful web browser.

The improvements could make Firefox the number one used browser in the world, right now it is number two behind Internet Explorer. We all know the reason for that right? IE has a deal with all the new computers to have it built in to the system so that when you buy a computer or laptop, you get IE. No wonder they are number one.

Firefox also is coming out with a new feature to get rid of the already old use of tabs at the top of the screen. The Panorama feature is designed to allow the user the ability to customize and create their tabs in any way they would like. With a stroke of the key, you can see an overview of all your tabs and easily maneuver through them to find the ones you want.

Watch out everybody, the browser war has only just begun…

Yes, you have started to hear no doubt about the holidays and all it’s wonderful magic. No doubt you have also heard about being safe, usually in reference to too much drinking at those awkwardly awful family parties and the weather. But at Computer Geeks we want to key you in on more important matters: your computer safety.

How safe is your computer? If you use the internet you take the risk of catching a virus, like the cold it can be prevented if you take certain steps. No I am not talking about downloading the latest anti-virus software or the cool new tool that can fly around your computer like superman saving your files from the evil file corrupter.

I am talking about what is already on your computer, like your web browser whether that be Internet Explorer, Firefox, or Chrome, that have the tools you need to protect yourself. You can find these tools in the ‘Tools’ menu bar located at the top of your browser. Look at ‘options’ on Firefox or ‘security zones’ on Internet Explorer. By telling your browser exactly what type of sites it is allowed to visit and the level of restriction, you are ensuring that you will be protected from spyware, unwanted advertisements, and those “drive-by” downloads.

You may have heard recently that there was a big “drive-by” attack that hackers did on IE6. What happened was that hackers were able to get into a certain website and make links using the sites name to another website, which people visited, and got screwed because just by being on the site malicious software and viruses were downloaded to people’s computers.They are still doing it on IE8, so be careful.

That is just one example of how easy it is for hackers to get into your system, simply by taking over a website and waiting for a user to walk aimlessly into the site, unaware that they will be regretting not listening to this blog and taking the necessary steps to prevent such a thing!

One of these steps involves securing your email, particularly in Outlook. A common pitfall that is easily overlooked is the text. You have two choices: HTML-Text, or Plain Text, which is better? It is not a question of better, but safer. HTML might look good, but in the long run it is dangerous because this is where all those phishing scams thrive on. By using Plain Text it disables the Active Content that opens email attachments automatically, and allows safer emailing.

Instant Messaging worms have become more and more vicious and prevalent in today’s internet world. Be careful when talking with your friends online, be wary of ‘Away’ messages, because if you are chatting with someone who sent you a malicious worm or virus masquerading as a link somewhere infected you could be in for a bad time. You can usually tell when a message like in email that is suspicious.

Hackers are always looking for new ways to get into your computer and screw things up. Do not allow them to, especially during the holidays when you should be out gallivanting around with your family enjoying the holiday spirit.

When browsing the web, I?m sure you?ve encountered a website that?s little more than an a stream of pages connected by the ?NEXT? hyperlink. Especially when looking at a photo gallery.

While some people might have no problem subjecting themselves to the ritual of clicking ?NEXT,? ?over and over, others would gladly welcome another way that cleverly groups those pages in a near seamless fashion. Well never fear Computer Geeks is here! We have found an easy way to get rid of the vaunted procedure of clicking “NEXT” over and over again!

Making that clicking into the mere scroll of your mouse, PageZipper merges every page into just one, substituting the scrollbar for the endless hyperlinks.

PageZipper can be used as either a Firefox extension or a bookmarklet (an application stored as a bookmark in your web browser).

Completely free and easy to use, PageZipper can be downloaded here.

Having issues downloading or setting up PageZipper? Contact us via email or call our friendly Geeks at 800-433-5435. We are here 7 days a week to help you.

From creating spreadsheets to playing the latest games, we use our computer for multiple purposes, one of the most common being our navigation of the internet.? With the use of the internet occupying so much of our time, it stands to reason that we?d want to enhance that experience as best we can.

When it comes to internet browsers, there isn’t a more ubiquitous one than Microsoft’s Internet Explorer. Bundled with Microsoft Windows, the most widely used operating system in the personal computing market, Internet Explorer is the standard by default.? However, in spite of its widespread use, there are alternatives to Internet Explorer that are arguably more popular with the geeks amongst us.

Because of its de facto popularity, a result of being packaged with Microsoft Windows, Internet Explorer has seen only incremental advances in how it functions. This lack of innovation has paved the way for competitors to release alternative choices which offer greater functionality and more reliable security for users browsing the internet.

Of those choices, my favorite is Mozilla?s Firefox.

Free and thoroughly customizable, Firefox is fast becoming the choice to which users are migrating from Microsoft?s problematic browser, its superior functionality immediately apparent:

While your internet browser of choice is a personal preference, there?s no denying that Firefox adds a bit more to the experience than Internet Explorer. Yes, Microsoft?s offering has certainly taken steps in the right direction, but much of its improvements were available in the first version of Firefox.

The functionality of Firefox may prove daunting to new users, but Computer Geeks is always available to show them how to get the best out of its use.