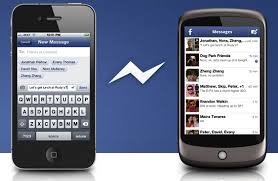 Ever see a movie or TV show that is so bad you can’t help but go see it again? Is the Facebook Messenger App in that category?

Every concern imaginable, from poor uploading to privacy issues, is what’s holding Facebook back. Previous changes haven’t worked so well for them either. I’ve been asked, “How is this any different than what Microsoft did to Windows XP back in April?” Well, by April, Windows had newer and better versions, so most people were comfortable with switching. Facebook Messenger App was the only plan, and few are happy with it. Plus, nobody really likes to be forced into doing something. That’s just human nature. People have gotten so comfortable with the old Facebook app and now to change everything is a breeding ground for disgruntle consumers. Will Facebook learn anything from this?

Facebook trying to compete with Groupon and Amazon Local

Starting Tuesday, Facebook is releasing Deals as a ?test? in five cities: Atlanta, Austin, Dallas, San Diego and San Francisco. The company, which has more than 600 million members, said it hoped that its ability to tap directly into the communications and activities of networks of friends will help it offer a more compelling service than rivals. It will be easy to share deals with friends, see when a friend buys something and find offers that your friends are interested in, said Emily White, Facebook?s director for local. Facebook will focus on offers for things that are best done with friends, like concerts or events, she said.
?You can receive Facebook deals via e-mail,? she said. ?But if there is a deal that is good for you, it will likely show up in your news feed at some point in the day.?
Most of the sites you can get deals from let you link the deals to Facebook but this would be more of the actual site getting these deals as aposed to sharing via Groupon or Living Social. This is going to be another way for Facebook to increase revenue streams, with the movie rental testing seemingly going well, it is no doubt that if Facebook has the right amount of deals, people will pay for them.

Check out our deal on Groupon?

I know, if you were just born then this is already old news about Facebook being used for everything except actually living your life. But quit running from the truth and acting like you are too good for such a thing as being social on a network. The truth is that Facebook is instantaneous information in your face internet intensity. The internet is supposed to be all of that allowing people across the globe to communicate with each other easily with fast speeds.

Email has been the first choice for communication, mainly in business, replacing the telephone. This AirTrans commercial is a funny one explaining this trend.

But there is a figure on the horizon, and it is in the shape of an ?F?: yes, Facebook is coming out with another idea to make messaging better. Not that it isn?t better already, I mean we have come along way from lighting signal fires and dialing a rotary phone, but how much more can we communicate better, faster, easier?

Well, let?s email Facebook and see what they have to say.

I haven?t heard back from them, but I got an instant response on Facebook, and this reveals the appeal for Facebook to combine email with instant messaging: contact. Everywhere you go online or anywhere that is related to sharing business, videos, music, ideas, advertising, you see a link to put it on Facebook. It is a connection that goes where email cannot go.

So when CEO Mark Zuckerburg remarked about comments concerning the revamp of the social messaging system Facebook and how it will be the ?Gmail killer?, he said ?It?s not email.?

What is it? The new Facebook will allow you to get email on Facebook. Wow, after all the virus and hack breakdowns that Facebook has had, I am surprised they are tempting such a thing. We will probably be hearing about people being hacked and having to call Computer Geeks to clean up all the viruses on your computer, but until then if you live life on Facebook then this new edition will fit the bill perfect.

Email and instant messaging are becoming the normal ways to communicate, talking is awkward, email is less personal and you can put your thoughts down easier to communicate better.

By combining the two, the new Facebook will grab multiple types of communication such as email and turn it into a more real-time messaging service. Say you use Gmail to get messages from clients and since you run your business on getting updates from customers instantly online; receiving fast updates beats out regular email since you will get all you need on Facebook.

To wrap this up, Facebook is just looking to pioneer out from the boundaries of their target market, almost like Google has been doing for the past couple years. They are looking at voice-chat and new ways to communicate.

Talking face-to-face is just boring, it is so much more fun writing it down and adding a smiley face!

They do not call it the “World Wide Web” for nothing. It is a spider-web, and it is world wide the information that is about you and is out there for everyone to see, if they really wanted to. The spider on the web is anyone who searches your name using different programs or services provided online, and it is amazing what comes up.

Say someone wants to know what you are up to. By tracking the electronic foot prints left behind by email, Facebook, Twitter, MySpace, or even just account activity, they can learn a lot about you in a short amount of time, about the time it takes to load a page. The world of today where there are no walls and information is out there flying around can be a dangerous one, if you are not careful.

The information that is out there can be grabbed by people search engines like Pipl, Spokeo, and CVGadget. It is not illegal, they are doing nothing wrong in the eyes of the internet police, but it does invade our privacy even if the information is out for people to see. It is like putting your dirty laundry out in front of the house, even clothes with small stains, the fact remains that our personal stuff can be easily accessed by anyone. Creepy.

So what can you do about it?

Put a stop to the mountain of information on you that is being collected by these search engines as you read this. First check out for yourself how much is out there by searching your name. Rapleaf is a provider with an open tool to let you see everything, while the other search engines only let you see bits and pieces. By going to that site you can actually manage what people see about you. No more spying from your ex-girlfriend or boyfriend, no more parental espionage, no more privacy pillaging! By ‘Opting-out’ on Rapleaf’s website, you can permanently delete all that saved information that Rapleaf has on you.

Another way to stop prying eyes is to adjust the privacy settings. This means going to all the sites connected to your email address and changing them individually

By doing this, you prevent search from sites like Pipl and Spokeo from getting into your private information like what music you like, who your girl or boyfriend is, where you live, the list goes on and on. Take back control of your privacy. Don’t let weirdo’s or people who do not need to see your personal life get the best of you. Who knows what people will do with information like that. You can protect your privacy even when you are on the web, these are ways to catch those spiders crawling around looking for trouble.

A new internet browser has hit the scene of an already crowded stage. It goes by the name of Rockmelt, and it is a change from the regular browser scheme. What Rockmelt does is use your Facebook ID to log onto the browser, anywhere in the world, and allow you to surf the net faster and easier. Behind the stage of internet browsers is the maker of Netscape. Has everyone forgot about this guy? Well he is back, and it sounds like better than ever.

The future is here. Rockmelt is here to reinvent the web. The primary purpose of Rockmelt is making the browser able to keep up with your friends, consume information, and search faster. It works on Windows and Mac’s right now for desktops and laptops. A Beta version is being released today, you can download it at rockmelt.com. If you go to the site, you will see an icon asking if you would like to be ‘Invited’ to use Rockmelt. Wow, it looks like this new browser is V.I.P. status, and you get on the list until they are? ready to let you in.

What is cool is that the CEO of Netscape, Marc Andreeson who helped start the Netscape Communications Corp., is fighting back against the same web browsers that put him out of business. He is doing that by funding these two men who founded Rockmelt, Eric Vishria and Tim Howes, and they are looking to change the way we use the internet.

In an interview with them on YouTube, they gave a sneak peak at the features of Rockmelt and what the catalyst is for the change. Instead of just an ordinary web browser like Chrome or Firefox where you click on a search link, wait for it to load, and then go back to the search page, Rockmelt turns the internet into a magazine enabling you to ‘turn the page’ so to speak. This sounds like a new era in the Internet age. Everything is on the internet, and it seems like everyone is on Facebook, so by integrating these two into one browser, Rockmelt can open the door to new ways to game, commerce, or just socialize.

The test of the browser was actually performed through Google’s web browser Chromium, but it can be used through Firefox or Internet Explorer. One requirement to be able to use the features of Rockmelt is having a Facebook account. If you have an account, and you get invited, then you are able to look at your friends to see who is doing what on a side-panel. On the other side-panel to the right is your favorite sites that you visit the most, and in between is the ‘magazine’ style search engine and a faster way to surf.

Netscape is back in action by sneaking in the back door with a whole new way to browse the web. Do not be surprised to see this type of browser become the main stream of using the internet.? Be sure to check out YouTube’s video of Rockmelt, as well as sign up to get into this new and exciting way to use the internet.